A Boston-based higher education and research school* has been on task to maximize the efficiency of its aging Building Automation System (BAS). Over the past decade, the campus has integrated new and existing BAS equipment, some of which are nearing end-of-life status but consistently operational. Equipment commissioning, campus-wide analytics, monitoring, and performance optimization are necessary to improve equipment capacity, identify anomalies and failures impacting system efficiency, and reduce energy consumption and demand.

*Due to confidentiality agreements, the name of the school is withheld.

Since 2008, Cimetrics has partnered with the school and the BAS manufacturer to monitor five university buildings, four of which comprise the main campus, for a total of 559,787 square feet. Analytika Pro Building Optimization Services by Cimetrics has been monitoring sensor and actuator data for 10,590 points with 700,000 data samples collected daily. Data modeling and simulations using Analytika’s 2000+ software algorithms enable the school to project annual energy savings and the ROI of capital equipment expenditures. expenditures.

Over the years, Analytika Pro identified 120 opportunities for efficiency improvement resulting in significant annual energy cost savings and reduced consumption and demand of electricity, steam, and chilled water. Savings opportunities were found campus-wide and could largely be attributed to optimizing equipment scheduling and setpoints, or equipment malfunctions.

Over the course of 10 years, the school has seen a 150% return on invested capital. Annually, the school realizes $413K in energy cost savings by implementing findings and recommendations made by the Cimetrics engineering team and Analytika Pro.

Some equipment anomalies discovered by Analytika Pro had a greater-than-average impact on the school’s annual energy savings, such as:

Fine-tuning the equipment scheduling revealed an Air Handling Unit in one of the buildings was running 24/7. With the Air Handling Unit now scheduled to run weekdays only from 6:30 a.m. to 6:30 p.m., the school has saved $130,784 per year in cooling, heating, and fan electric energy savings. 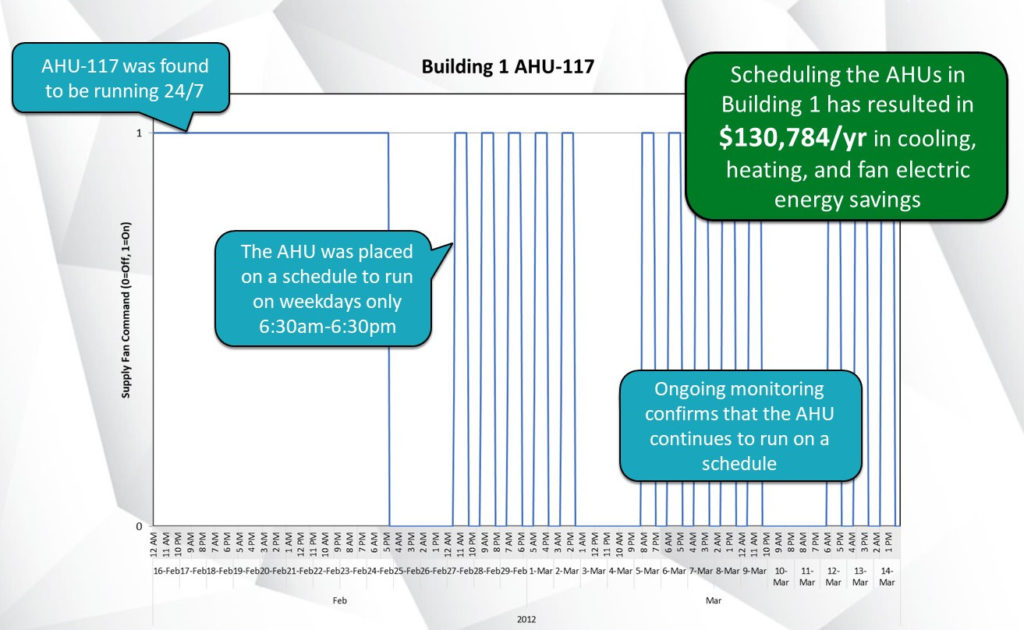 Analytika discovered many VAV units in one of the buildings had high minimum airflows when unoccupied. By lowering the setpoints and implementing new schedules for the VAV units, the school realized $95,247 a year in cooling, heating, and fan electric energy savings. 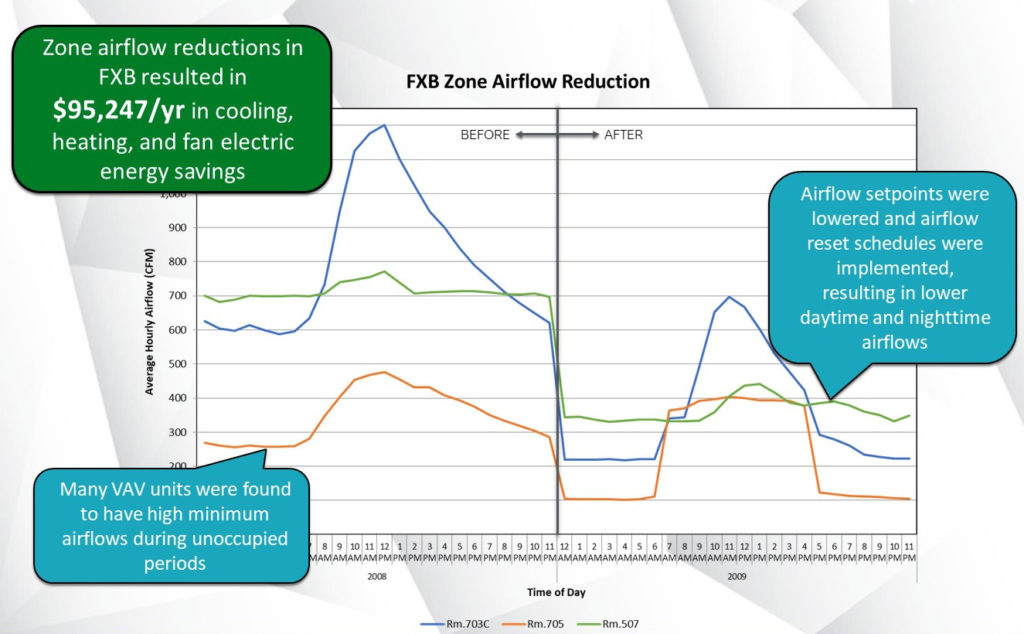 When a low discharge air temperature was discovered along with a closed cooling valve signal, a leaking chilled water valve was found. A simple repair of the leaking cooling valve resulted in $37,645 a year in cooling and heating energy savings. 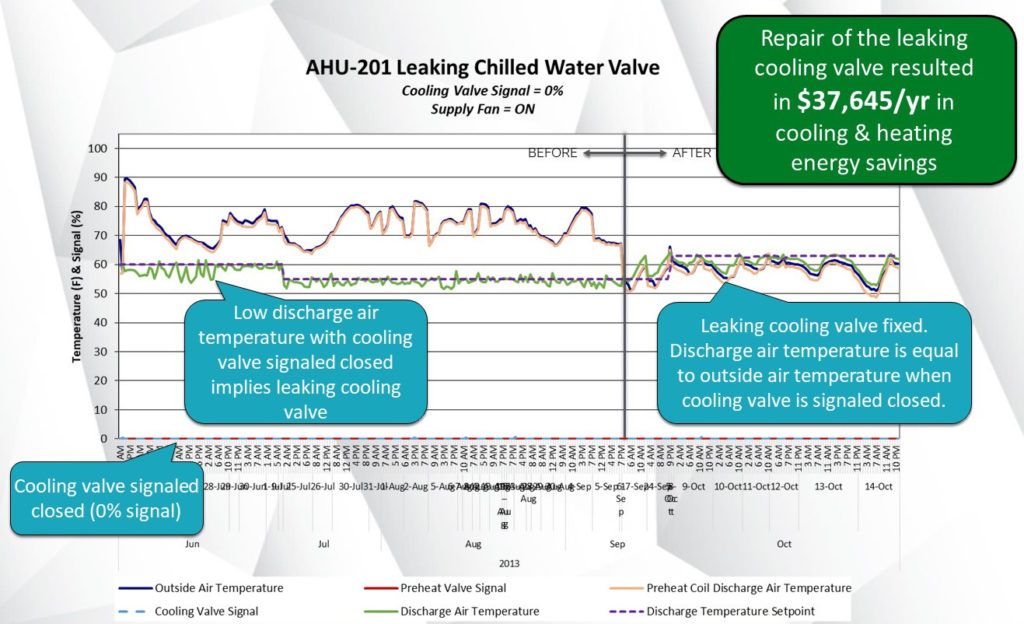 Analytika is helpful in identifying the root cause of equipment malfunctions particularly in cases where it is not apparent there even is a problem. Ongoing monitoring of an AHU in one of the campus buildings found signs of a possible inefficient economizer and a leaking preheat valve. Closer inspection of the actual unit by the customer confirmed a ripped portion of the duct flex connector as well as a leaking heating coil valve. Now fixed, the combined annual energy savings for these two issues is approximately $18,000 per year. 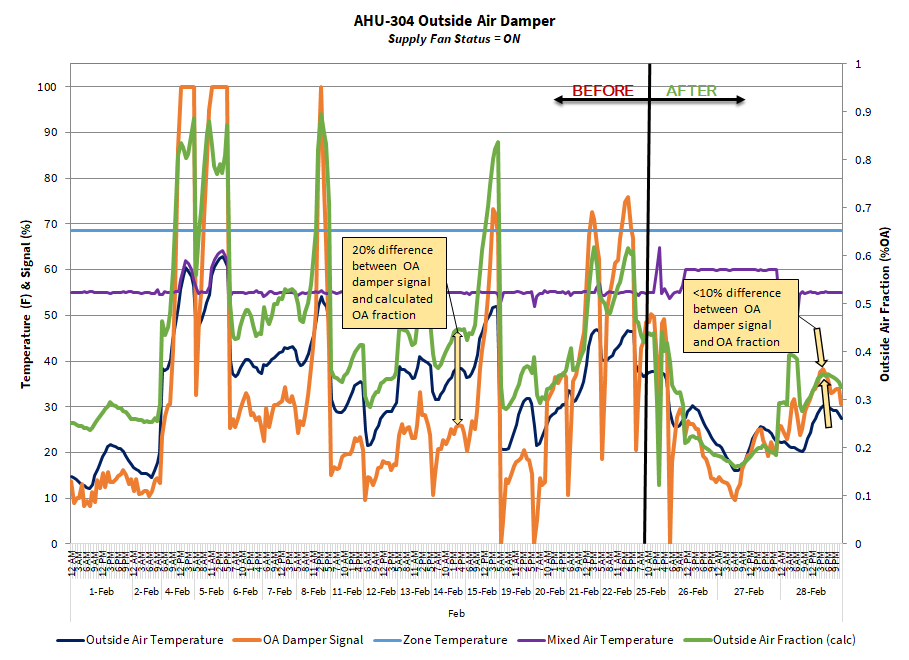 Cimetrics engineers leverage the power of Analytika to provide ongoing project reviews and actionable recommendations for the school to achieve the best performance and longest lifespan from their automation system. Using custom reports and historical data, Cimetrics works with the school to participate in utility incentives bringing further value to their investment. Analytika’s forecasting capabilities are used to validate equipment upgrades such as replacing fans with VFDs, and it can measure the success of ongoing maintenance programs such as periodic AHU coil cleaning.

The partnership between Cimetrics and the school goes beyond the BAS, helping the school implement new technologies and comply with state regulations.

A new biorepository system to serve as a central location for lab samples was proposed to replace standalone freezers. Cimetrics’ custom calculations identified projected energy use and demand costs of the new equipment to justify its implementation.

As a research facility, the school houses a BSL-3 (Biosafety Level 3) laboratory that must be recertified annually by the State of Massachusetts to continue operations. Cimetrics provides the school with a custom report that satisfies the state’s requirements.